At Restored Church, lives are changing as a result of the Lord’s work through the ministry of the church and its partnership with Regular Baptist Builders Club, says Executive Pastor Ryan Miller. 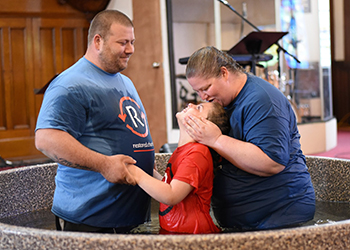 McKenna Artmont gets baptized along with her parents, Joe and Amanda, at Restored Church.

WILKES-BARRE, Pa.—At Restored Church, lives are changing as a result of the Lord’s work through the ministry of the church and its partnership with Regular Baptist Builders Club, says Executive Pastor Ryan Miller.

In the fall of 2019, Regular Baptist Builders Club gave Restored Church a $10,000 Build Up grant and a $10,000 loan. The church used that money “to make some immediate helpful updates that have improved and solved some facilities issues,” Miller says. Among the updates were remodeling and providing better access to the children’s area.

One student who appreciates the renovations in the children’s area is McKenna Artmont. She started attending Restored in 2018 with her aunt and loved the kids’ ministry. McKenna begged her parents, Joe and Amanda, to go to church with her, and eventually they went. At least eight members of the Artmont family, including three of the children, have now professed Christ as their Savior. McKenna, Joe, and Amanda were even baptized one recent Sunday. Other members of their family have also begun attending the church and are asking great questions about faith in Jesus, Miller says. 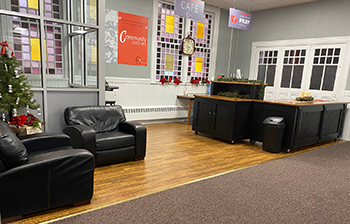 The testimony of another church attender, Mark Falkenstein, can also be tied to the church’s improvement projects. Mark decided to attend the church after his wife, Rose, was baptized. But he had serious anxiety when he started attending. In fact, the first time he stepped into the church, he literally turned around and ran four blocks home, Pastor Miller says.

Mark later gained the courage to return. He made it through an entire worship service and decided to go to Growth Track, a session that helps people get connected to Restored Church and equips them to grow in their relationship with God. The church holds the weekly session in its newly remodeled basement.

Pastor Miller thanks Regular Baptist Builders Club and its donors for the financial help that led to these life changes. He says, “We can’t thank you enough for your partnership with our ministry.”

4 Activities To Fight the Wintertime Blahs

The Why Factor of VBS

RBP VBS emphasizes the "why factor," which teaches kids why they should believe what they are being ...more

Myanmar Ministry "Honored to Serve Others"

"We praise God for His guidance throughout this calendar year," says Victor Vula of ...more

The city council of West Lafayette has proposed an ordinance that some say is an attack on Biblical counseling, parents' rights, and religious ...more