Thanks to Regular Baptist Builders Club and its donors, Bridge of Faith Baptist Church has renovated a former bank to become the church's new home. 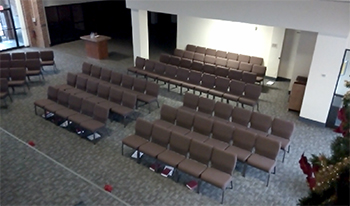 The interior of a bank is now the auditorium for Bridge of Faith Baptist Church in Omro, Wis.

OMRO, Wis.—Thanks to Regular Baptist Builders Club and its donors, Bridge of Faith Baptist Church has renovated a former bank to become the church’s new home.

Bridge of Faith Baptist Church was established in 1854 in Oshkosh, Wisconsin, as First Baptist Church and, later, First Baptist Temple. After its first two buildings were destroyed by fires, the church constructed a new building in 1901. The congregation has been meeting there ever since—in the beautiful 9,000-square-foot neoclassical revival style building featuring a dome on the roof and stained glass windows. But when Chris Hindal, director of Regular Baptist International, visited in November 2018, he noted, “The congregation agrees it is time to write a new chapter.”

That year the church was blessed with an inheritance—enough funds to pay cash for a building in the small community of Omro, 15 minutes from Oshkosh.

“The town of Omro has no Bible believing church, and we know it is a privilege to move into this community and be the light of Christ,” says Allison Marco, wife of Pastor Daryl Marco.

Bridge of Faith purchased the building, a former bank, but needed to renovate it to accommodate the small church, which has about 35 members and 60 attenders. The church turned to Regular Baptist Builders Club for financial help. In the spring of 2019 Regular Baptist Builders Club gave the church an interest-free Build Up loan of $20,000. “Once our building in Oshkosh sells, we can pay back the loan,” Allison says.

One of the first renovation projects the church completed was the electrical work, including a fire alarm system. “And the fire alarm system works well!” Allison says. During the church’s first service in the new building, on Christmas Eve, someone accidentally triggered the alarm. “That added extra excitement to the service and allowed us to meet Omro police and firefighters,” Allison says.

She says, “Thank you, Builders Club, and your donors for helping us to get this renovation off the ground, and may God have the glory as we praise Him for His blessings!”

Next post Church Renovates and Moves into Former Bank

Camp Manitoumi hosted a ladies’ retreat with the theme “Light of the ...more

Church Calls One of Its Own as Associate Pastor

“Just trust the Lord and live in joy," Mike Stallard told the audience in a prophecy conference, where he preached on Revelation 21:1-8 and his ...more