Two months after Calvary Baptist Church burned to the ground in a massive wildfire, church members have been allowed back onto the property. 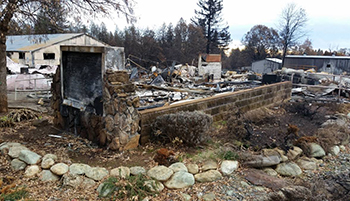 PARADISE, Calif.—Two months after Calvary Baptist Church burned to the ground in a wildfire on Nov. 8, church members have finally been allowed back onto the property. “We have walked the site, and as we feared, nothing remains,” said Pastor Gerry Zordel. “We did find the church bell, which delighted everyone.”

Regular Baptist Builders Club has raised $26,000 in an emergency Disaster Relief California Fires fund for the church. The church, which now totals about 22 people, continues to meet in nearby Chico, California, in a church member’s home that was not affected by the fire.

The church’s next task is to remove the framework from the gymnasium and the debris from the property. However, the church is concerned that the city will require certain standards for removal, and those standards remain unspecified. The church is hoping that FEMA will oversee the removal process to satisfy the city’s standards and to avoid a scenario of the city refusing to let the church rebuild because of a substandard removal process.

Many people in the church family have relocated to other states because housing in Paradise is limited, but three people are moving back to the city. “I suspect that more people will be moving away as other opportunities present themselves,” Pastor Zordel said. “The majority of those seeking homes have found them, but they are too far away to stay connected to our congregation. Those who remain have found that they must buy everything, starting with the basics.”

Members are still without permanent employment, and Pastor Zordel said one of the men used the last gift the church distributed from donations to pay his rent. “Everyone has needs and recurring needs,” he said. “One thing is purchased, replacing something that was lost, only to find another thing needs replacing.”

From the beginning, Pastor Zordel says the church has wanted to help its community, but meeting the immediate needs of the church family is a constant struggle. “We have so few left, and even fewer able to help,” he said. “Our own needs occupy our thoughts. Homelessness is only a couple steps away for a few. That anxiety weighs heavily on our people.”

Previous post Board Awards Record Number of Grants and Loans

The Baptist Bulletin podcast is also available via iTunes, Stitcher, and Google ...more

As VBS gets closer, invite more and more volunteers to be ...more

Conference Challenges Believers to Be 'Full of Faith, Not Fuss'

The Hebron Association of Regular Baptist Churches met for its annual gathering May 2 at First Baptist ...more