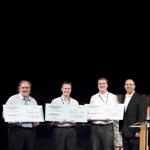 At the 2012 GARBC Conference, Baptist Builders Club presented fellowshipping churches with checks of assistance. During the year, the ministry granted 11 churches assistance, and three of them were represented at the conference for the presentation.

Great Commission Baptist, Schaumburg, Ill., recieved $10,000 in the second installment of a three-year Start Up grant. In 2010, the church received $5,000 toward renting space in a local community center and introducing itself to its community. This year the church has officially launched, is doing much more outreach, and has a dedicated space in a shopping center. Volunteers from Church Care Construction and two Iowa churches remodeled the space, and teens from fellowshipping churches came to canvass the community. This year the church was identified by a recognition council of the Illinois-Missouri Association of Regular Baptist Churches as a properly organized Baptist church and was accepted into fellowship by that association. It was also accepted into fellowship with the national association at this year’s GARBC conference.

West Corners Baptist, Endicott N.Y., received $9,000 in emergency assistance through a Help Up grant. In September 2011, a flash flood hit the southern tier of upstate New York, inflicting $30,000 worth of damage on West Corners Baptist. The church lost its boiler and heater, among other losses. With the grant from Baptist Builders Club, the church was able to replace these appliances and officially open its doors to the public for worship and provide relief efforts for others in its community. Pastor David J. Cook expressed his church’s gratitude to BBC–USA, saying, “We have a long way to go in rebuilding, but you have helped us in a HUGE ‘first step’ in coming back.”

First Baptist, Grundy Center, Iowa, received a $7,500 Build Up grant toward construction of an addition to its facility—a learning center with a currently unfinished basement. Construction was completed in April, and the church family has been using it since early May. The addition has provided an excellent place for the Women’s Bible Study, which reaches about 40 women, at least half of whom are not from the church. The room was also the site of an event for men, featuring a simulcast from Sherwood Baptist Church, Atlanta, Ga., the producers of the film Courageous. In addition to men from the church, a few others from the community attended this event. The church has also made the room available for any local groups to rent for educational or work meetings at a fraction of the cost of other facilities in town. In a few weeks this addition, which features the latest technology, will house the church’s RBP-VBS to add some “techie” features that kids enjoy.

In the midst of severe flooding in Michigan, water filled the parking lots of Calvary Baptist Church but stopped short of reaching the church ...more

Around 3:00 a.m. on a Thursday last October, Pastor Walter McDonald was awoken by a phone call from a church member, who told him the ...more

Listening to someone’s story is the best way to get to know that person, opening the door to share your own story as well as ...more

Changing Times and a Changeless God