A focus on missions and a bilingual worship service were the highlights of an annual dinner at Grace Baptist Church, Washington, Indiana.

Each year in October, Grace B 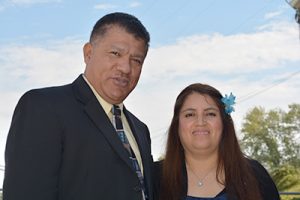 aptist Church, Washington, Indiana, celebrates the arrival of fall with a hog roast dinner. The annual celebration Oct. 16 reflected a greater spiritual dimension brought about through the addition of two invaluable components.

The first was due to moving the church’s missions emphasis to the month of October. Grace Baptist was pleased to have as its missions speaker Michael Nolan, director of Regular Baptist Builders Club. Through the work of this important ministry of the GARBC, Grace Baptist received assistance in 1973 with a grant for its new building, and again in 2010 received the funding necessary to replace the roofing.

Second was the inclusion of the church’s sister Latino congregation, Jesus Christ Is the Rock of Our Salvation, for a bilingual worship service and fellowship. Rusty Young, an important part of Grace Baptist’s ministry, translated from English to Spanish and Spanish to English. The lyrics of the songs were made available in Spanish on the video screen, and a Latino brother provided the special music. Though the people in attendance are from varied backgrounds and different tongues, the unity of the Holy Spirit could be felt by all.

After the message, many surprises awaited those in attendance. As the diners entered the fellowship hall for dinner, a journey awaited, and each one accepted the challenge. Candy Millington, the dinner’s hostess, encouraged everyone to break out of their comfort zones by asking them to draw a card assigning them to a particular missions team (their table). Just as missionaries often encounter surprises and uncomfortable situations, so did those in attendance. In order to take the message of the gospel to others, missionaries must make new connections and relationship with those they do not know well.

New connections were made while people ministered to each other. Language barriers were forgotten and God’s love shone through. While the food was delicious, the fellowship was even sweeter. As the afternoon wound down, the challenge had been presented. Each believer can be a missionary every day in every place.

A heart full of gratitude is one of the best weapons to have in our arsenal as we battle the difficulties of ...more

The Wisconsin Association of Regular Baptist Churches appointed Steve Schultz as its state representative during the association's annual ...more