Several members of Orchard Avenue Baptist Church have been displaced as the convergence of eight wildfires is sweeping through three counties in the city. 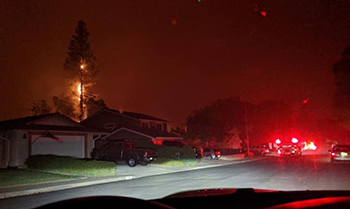 VACAVILLE, Calif.—Several members of Orchard Avenue Baptist Church have been displaced as the convergence of eight wildfires is sweeping through three counties in the city.

Pastor Ken Doan says he got the first call at 2:00 a.m. notifying him that some church members were evacuating their homes. “We have had multiple families forced into evacuation,” he said. “We are blessed. All of them are okay at this point.”

One family chose to stay and fight the fire. “They saved their property and are okay,” Ken says. “We have one family that is not allowed back into their area yet.”

One man in the church is a first responder who lives on the edge of the affected area. After first evacuating his own family, he went to the command center to help manage the fire. “Like a typical first responder, they do whatever they need to do,” Ken says. “Then they leave their family to go protect the community.”

The church announced on social media that it has opened its facility for affected residents. Ken explains that the church is open for people who need to relocate their vehicles or RVs, use the bathrooms or Wi-Fi, or get water.

On Wednesday afternoon some church members were going through the community, checking on other residents. “We have church families who are out knocking on doors, making phone calls, and checking on the elderly,” Ken says.

He describes the situation as still very fluid. The weather has been “well over 100 degrees all week,” he says. “This and no power are making things more difficult.”

Ken, whose home is next to the church, expects to be evacuated at any time. “All of the homes across the street from mine have been evacuated.”

Professions of Faith at Bible Seminar in India

"By your prayers, the three-day Bible seminar at Gwaltabi Baptist Church is complete," says David Chhetri of Manipur, ...more

Baptisms and Bibles at Churches in India