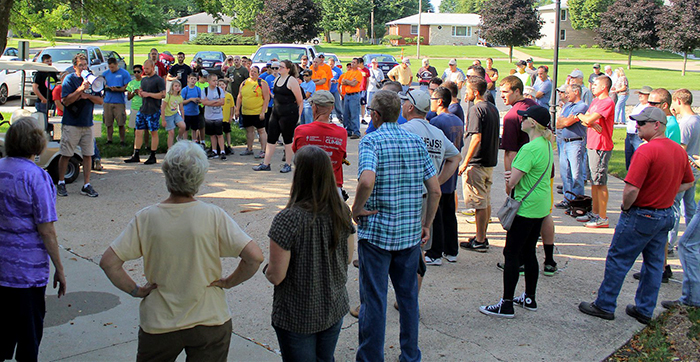 Pastor David Strope of Ankeny Baptist says the rain flooded part of the church basement as well as the homes of at least 15 church members, who had anywhere from several inches to several feet of water in their basements.

“We are still trying to sort out our situation at the church,” Strope said Tuesday, July 3, while working on flooding damage at his own home. “The air ducts are buried in the concrete floor and they filled up with water. We are trying to pump it out, but the water table is so high in this area that we can’t keep up.” He said the church no longer has water on the floor, but damage to the ductwork can’t be analyzed until the water recedes and the airways dry out.

The church is in the process of compiling a list of members who were affected. Many people, like Strope, had to hire remediation services to remove damaged carpet, drywall, and any possessions that could be salvaged. 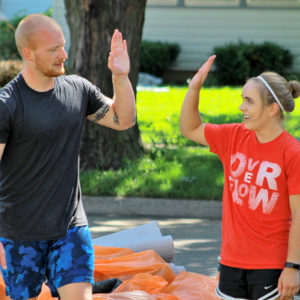 On July 3, more than 100 people from across the state and outside Iowa spent the entire day ripping out wet carpet, underlay, and drywall and removing tenants’ belongings. Communications Director Andrew Gogerty says that two-thirds of the demolition work was accomplished the first day.

An announcement on Thursday, July 5, said that an insurance adjuster arrived the day before and believes that everything will be covered. The announcement also said that the school does not need any more volunteer help until after the school hears back from underwriters.

The school also put out a plea for people who could house 10 tenants (some being families with children) for up to two months until their apartments can be repaired.

“It has truly been humbling and a great encouragement to see the outpouring of love and support from so many of you,” Tillotson says. “It’s amazing to be part of the body of Christ. Only those who have been through such a crisis can fully appreciate how it feels to be so supported.”

Next post Iowa Church and College Recovering after Flooding

Unions of the Communities of Baptist Churches in Africa (UCEBA) organized a biblical conference to strengthen the pastors responsible for the Baptist Churches. A two-day ...more

Merry Christmas from Our RB Ministries House to Yours!

Christmas is about a miracle that we can’t quite wrap our brains around yet believe in with all of our hearts – the incarnation of ...more

The year is nearly over, and that means Christmas will be upon us soon. I’ve been reflecting on the profundity of that silent, holy night ...more

IARBC Students Learn It’s Not Just ‘Me and Jesus’