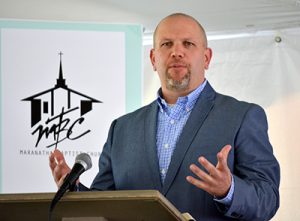 Throughout the Bible the Lord reminds people to tell all generations of the wonderful things He has done. Part of that is preserving the memory of how a church began and the path that was traveled to get to where it is, as well as telling of the impact it has had on its congregation and community.

Maranatha Baptist Church in Dover, Delaware, reached a golden milestone of having ministered for 50 years. To celebrate its anniversary, Pastor Lance Wager and committee members planned a joyous weekend Sept. 17 and 18.

That Saturday afternoon, church members shared personal testimonies of what being part of Maranatha has meant in their lives, while others told of how the church began. Clarks Summit University students Drew Bundy and Lane Bonewitz, accompanist, led the congregation in music. Guest speaker Pastor Don Whipple congratulated the congregation on their milestone and challenged them to keep serving. The day concluded with dinner served by the youth group. The teens provided exceptional service and were a blessing to everyone.

Sunday’s worship service included congregational singing led again by Drew Bundy and Lane Bonewitz, along with more testimonials of the church’s impact. Pastor Wager plays a big part in impacting lives. He has a servant’s heart, members shared, and is there at a moment’s notice whenever anyone needs him. Michael Nolan, director of Regular Baptist Builders Club, gave the morning message. In 1973, during the church’s early years, it received a grant from Regular Baptist Builders Club to assist with  renovations. What a blessing it is, Nolan says, to look back and see how far the church has come since that time and how the Lord has blessed it.

California has natural beauty and many venues for family fun. A great way to see sights you normally wouldn't visit is to plan a vacation ...more

Thanks to Regular Baptist Builders Club and its donors, Bridge of Faith Baptist Church has renovated a former bank to become the church's new ...more

"Living Is Killing Us"

The human condition is fatal. Yet there is a uniquely Christian way of thinking about death: "You have delivered my soul from death” ...more

The idea that shame has no place at all in the life of the believer says too ...more