The series of destructive tornadoes that hit central Ohio Monday night appear to have missed most GARBC churches and their members' homes. 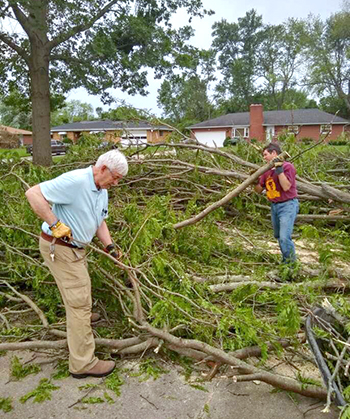 BROOKVILLE, Ohio—The series of destructive tornadoes that hit central Ohio Monday night appear to have missed most GARBC churches and their members’ homes.

On Tuesday Chuck Pausley, state representative of the Ohio Association of Regular Baptist Churches, and the staff of Regular Baptist Builders Club called about a dozen churches to check on their welfare. Most reported little or no damage to church property or church members’ homes.

However, Pastor Laid Baldwin of Bible Baptist Fellowship, Brookville, Ohio, reports that his community is a mess, with roads blocked by debris, fallen trees, and downed power lines. He tried to get to his church but was unsuccessful because 80 percent of the traffic lights were not working. “Traffic was at a standstill,” he says.

“We live in Harris Township, the hardest hit,” he said on Tuesday afternoon, standing in his backyard and looking at trees lying across power lines. Power to his home, which was undamaged, was restored Wednesday morning.

A member of Bible Baptist was able to drive by the church and told him the building appears to be undamaged. However, at least one church member, Betinna Angel, lost her home’s roof and sunroom. “She told me that she is thankful she still has a house,” Laird says. “Hers is the only one in her subdivision left standing. Most of the others were demolished.”

Laird is a community service chaplain with Regular Baptist Chaplaincy; he serves with the New Lebanon Police Department. “I want to get out and help them if I can,” he said on Tuesday, “but I’m locked in.” On Wednesday he was able to help a church member, Harold Pulver, clear debris from his and his neighbor’s yards.

The Ohio governor has declared a state of emergency for Montgomery County, where Brookville Baptist is located, as well as the counties of Greene and Mercer.

A Perfect Time for Your Church to Grow

By Bob Cowman I tend to see opportunity at the strangest times and in the weirdest ways. If you read the news or follow the commentators, ...more

Not able to attend the 2020 GARBC Conference? Read news and view photos from each day of the conference. Audio of conference messages is also ...more

Remembering Those Who Have Departed

“Each year, we make note of faithful servants of Christ that have gone to be with the Lord,” David Strope said at the 2020 business ...more

Give People a Track to Run On: Leadership Development