Rebuilding a community after a widespread fire can take months even before construction starts. Insurance adjusters and government agencies must evaluate needs and levels of assistance, and then the true financial burden on a family and a community is revealed.

Clare Jewell, director of Regular Baptist Builders Club, has been following the situation of recent wildfires in California, particularly after fires destroyed the homes of families from two GARBC churches in October. The needs in California are great.

Pastor Jeff Marshall of First Baptist Church in Windsor, California, says his church and its Christian school has nine families who were affected by the recent California fires. “We had two church member families, one regularly attending non-member family, and one irregularly attending non-member family who lost homes as a result of the fire. In addition, we had five families in our school who lost homes in the fire. I’m not sure of the exact number of people involved, but it is roughly 15 to 20.” Pastor Marshall appreciates the ongoing prayer and support for his church. 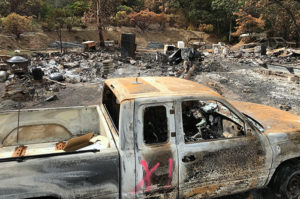 The remains of a home and truck belonging to a member of First Baptist, Weaverville, Calif.

Pastor Jay Underwood of First Baptist Church in Weaverville, California, says his church has two families who lost homes in the fires. One church member, Bill Eddy, a logger in his late 60s, had to come out of retirement because the home he lost was not insured. “He tried to retire, but because of the costs of rebuilding, he needed to go back to work,” Pastor Underwood says. “He’s a neat guy who is a part-time caregiver for one of his elementary age granddaughters.”

Pastor Underwood says his rural church has been able to give Bill about $5,000, but that sum greatly falls short of his need, since his home was a total loss. Bill faces additional challenges, as problems were made worse by government agencies who were trying to help. “The EPA came in and took out all kinds of topsoil because it’s burnt or contaminated,” says Pastor Underwood, “but in the process they ripped out his water lines that he now has to repair, and other things like this.”

Another church family—a mother, daughter, and a cousin, all between the ages of 60 and 80—lost a mobile home they had owned but had moved out of. Thankfully they were insured.

Pastor Underwood has been approached by the Weaverville Rotary Club, who was calling area churches and others in the community to see what kinds of resources they had to help affected families. “We’re certainly not expecting anything, but if something does come this way from Regular Baptist Builders Club for Bill Eddy or others in our community, we will praise God for that,” he said. “We’ll praise Him regardless!”

Would you consider helping these communities? Many people in these areas are entering the Christmas season still reeling from the staggering loss of their homes. Make a donation online by selecting “Disaster Relief—2017 CA Fires” in the drop-down menu, or send a check to 3715 North Ventura Rd., Arlington Heights, IL 60004.

Three ministry leaders from Bethany Baptist Church traveled to San Andres, Cuba, a small farming community in the western part of the country, to teach ...more

It’s risky to run on empty—to just keep going with no assurance you will complete another mile. Yet we often do this in our lives ...more

GARBC National Representative Mike Hess had the privilege of speaking at the Growing in Leadership Conference at Impacto Bíblico Iglesia Cristiana Bautista in Santa Marta, ...more

Gracious. This word covers a lot: kindness, courtesy, good taste, tact, compassion. Today churches need to be gracious in every avenue of ...more