Endicott, N.Y.—West Corners Baptist Church has started replacing its boiler and water heater with help from the GARBC’s Baptist Builders Club. After the work is completed, the church will be able to officially open its doors to the public for worship and provide relief efforts for others in its community.

Pastor David J. Cook reports on the damage inflicted on the church’s building and parsonage during flash flooding that hit the entire southern tier of upstate New York in early September.

“We were evacuated from the back porch of the church parsonage in the bucket of a Caterpillar front-loader on Wednesday, Sept. 7,” says Pastor Cook. On its last four trips, the machine carried an elderly member of West Corners Baptist, her cat, and her oxygen machine; two young men; and Pastor Cook and his son Colin. “We were evacuated to the West Corners fire station. But one hour later we were re-evacuated to a Red Cross evacuation center in neighboring Endwell when the previous fire station began to take in water.”

Pastor Cook, his congregation, and their neighbors are rejoicing that not one human soul was lost during the evacuation of 20,000 people. Pastor Cook says, “The Lord was moving His hand, protecting thousands of workers and first responders.” 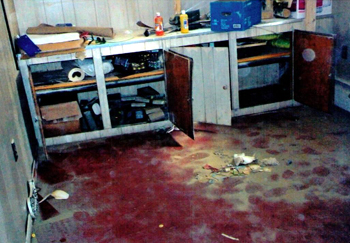 The 70-year-old building of West Corners Baptist and its parsonage are sound, solid structures. Although the two escaped total devastation, the church lost all of the appliances and supplies that were in the kitchen, social hall, classrooms, nursery, storage rooms, and food pantry. And the parsonage lost its furnace, water heater, washer and dryer, electric service, and a host of the Cooks’ personal items.

Pastor Cook explains why the church could not replace these things on its own: “The church has very good fire insurance, but no flood insurance. Like many other areas, we had never been flooded before. FEMA wasn’t able to help, although its officers and workers were as polite and as helpful as possible.”

Pastor Cook says BBC–USA Director Michael Nolan was a constant companion through e-mails and phone calls. Cook especially appreciates Nolan’s personal attention, “encouraging me, my family, and our church membership. In itself, this was a great blessing.”

Baptist Builders Club sent West Corners Baptist “a donation for an incredibly generous amount,” says Pastor Cook. “It has served to pay the lion’s share of replacing the church boiler and water heater.”

He says, “We of the West Corners Baptist Church want to publicly thank all of our brothers and sisters in Christ who have contributed to this donation through the Baptist Builders Club and through the efforts of the Nolans. We thank God for you, and ask His blessings on your ministries. We have a long way to go in rebuilding, but you have helped us in a HUGE ‘first step’ in coming back.”

The Jesus film has been a very effective tool to share the gospel in many countries of ...more

A ministry that partners with Regular Baptist International sends a plea for prayer after a tragedy. The name of the ministry is being withheld due ...more